If you had the opportunity to live out your dream, but had to instantly drop any financial security you have to do it, would you do it?

The shop was going out of business and the previous owner attempted to liquidate the inventory. Dona felt lucky enough to learn this when she entered the shop. This was her shot to live out her dream. The fabric displayed was full of dark and sad colors, and each roll spelled of cat urine. The employees did not show kindness and enthusiasm toward the customers.

Dona knew she could make the place have a happier feel with new fabric that had a more appealing smell, a kinder staff and fabric designs with a more cheerful feeling to them.

But first, she had to buy the store.

The previous owner told Dona that if she could handle all the legal to-dos (with the landlord, attorney, accountant and tax collector) and handled the needed financials in two weeks, the store would be hers.

The clock began to tick. After one week, Dona had tackled all the legal requirements to make sure the store was in the best condition. Everyone she needed to contact to ensure this later reported back saying that the store was entirely up to code.

Dona nervously signed a three-year lease. With no notice ahead of time, she quit her job in the Western Governor’s University financial aid department.

After one wild week, Dona managed to quit her job, handled the legal requirements and aquired the store. Dona arrived at the store with the check in hand to purchase the store and the ownership papers to be signed over, the owner said, “I’ve changed my mind.”

Instead of signing, she expressed that she wanted Dona to purchase the rest of the inventory the owner attempted to liquidate, as well as the other financial requirements already in place. To know the exact worth of the inventory, she began counting all the fabric in the store and its worth. This process lasted two and a half days.

The owner decided to retract her words again by demanding over double the price for the inventory than initially agreed upon. After some convincing by Dona’s attorney, the owner decided to liquidate as much of the inventory herself, the original deal was set aside, and Dona had to scramble to contact vendors and arrange to have fabric shipped in and/or picked up.

With the original deal set in place again, Dona’s lawyer told her that she had one night to choose a good name for the store because they would be moving out everything from the previous store owner to move in Dona’s new supplies and inventory that same day. Dona decided to call the new store The Sewing Basket.

When she chose the name, she returned to the store once again to warn the store owner to be out by the end of the weekend because she would sweep the store and change the locks on Monday morning.

To top off the craziness, the previous owner took all of the current fabric from the store, moved it directly across the street from the shop now owned by Dona and held a yard sale the Monday the store opened. Unfortunately for the previous owner, she didn’t have much success with the sale. She ended up moving all the items into the basement of her daughter’s house, occupying much of the basement.

After two crazy weeks, a list of legal obligations finally completed and a breath of fresh air, Dona Shadowen had given up her job and lost several nights of sleep to live out her dream. She was now the owner of a quilting store.

Dona has been the owner of the quilting store for seven years. She gained a partner, named Marie Goodridge, in 2017 to run the store. Marie and Dona have been special friends for decades and enjoy handling the store together. 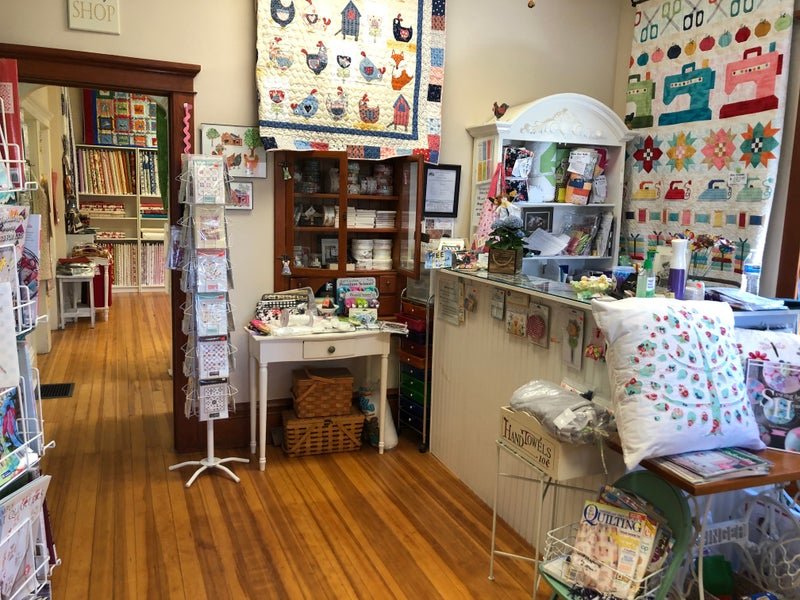 When entering the store, our hope is to have customers feel like they are walking in their grandmother’s house. Soak in the feel of many patterns in fabrics. 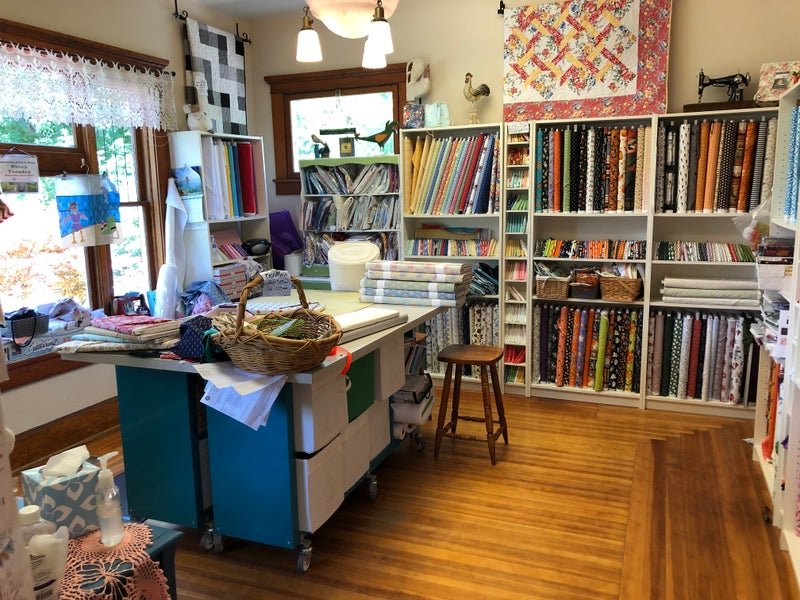 Turn to the first room on your left and enter our room with the cutting table and our latest fabrics. Don’t forget to browse our quilting kits here as well! 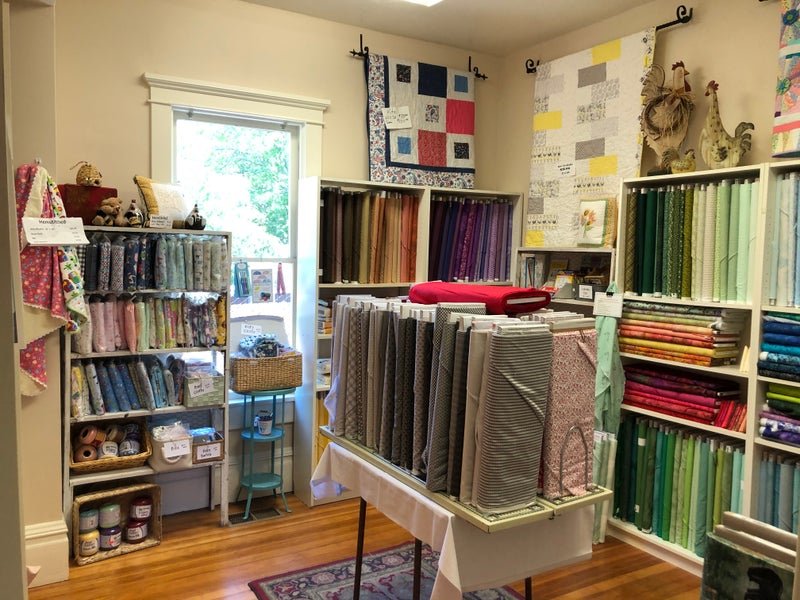 Room beyond the stairs

The second room on the left of the front room is another location to find new fabrics as well as some string for other similar sewing projects. Browse more of our sewing kits here, too. 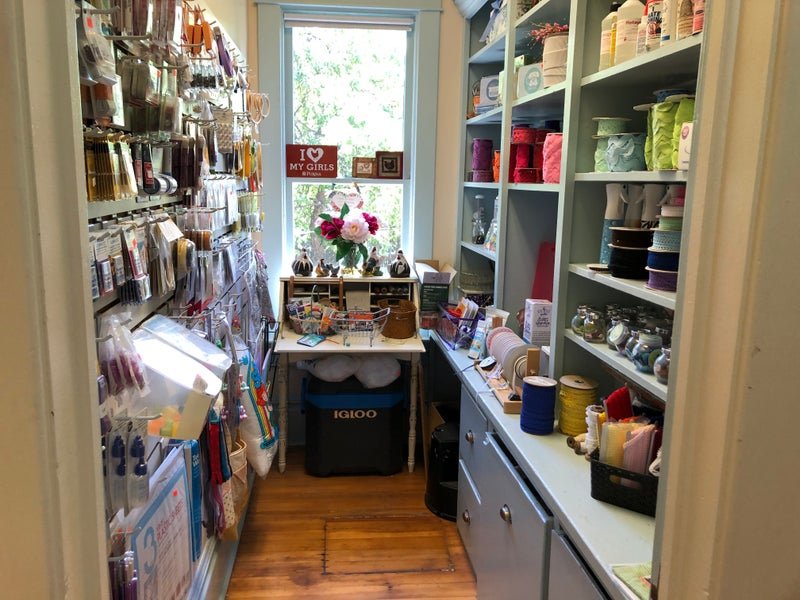 Exiting the previous room, walking back into the hallway, and entering the first room on the right, explore all sorts of accessories and supplies including, ribbon, scissors, needles, fabric pens, bobbins, etc. 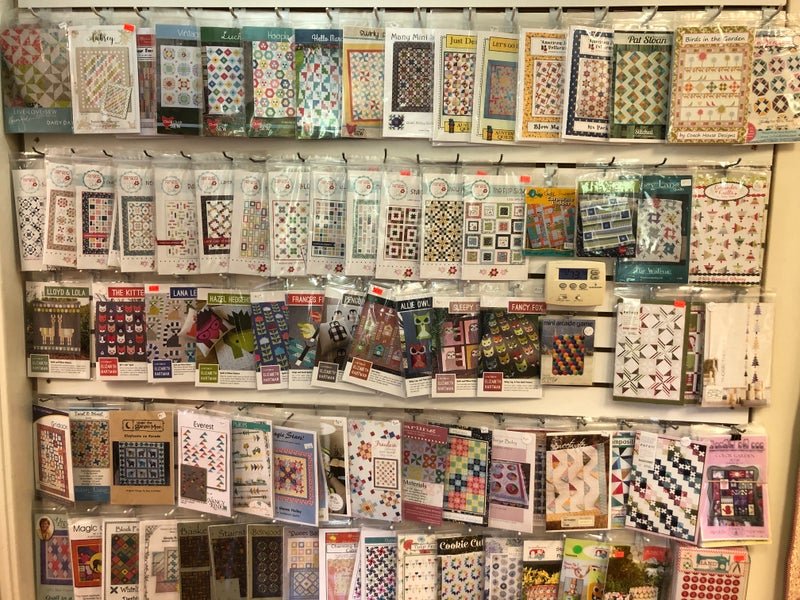 The wall across from this room holds all sorts of patterns for quilts to choose from. 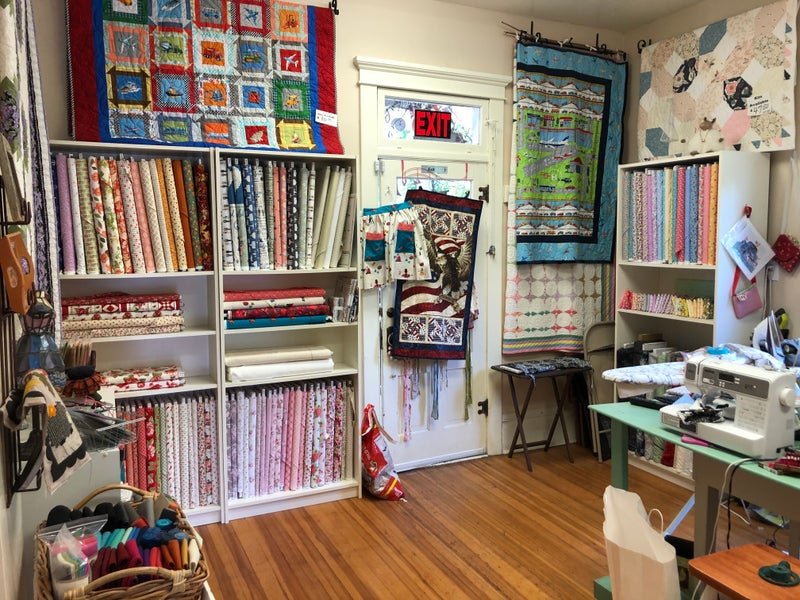 Our larger back room has a large variety of fabrics which are more color-coded. Find anything from extravagant patterns to simple, repetitive designs in this room (this shows only one angle of the room). 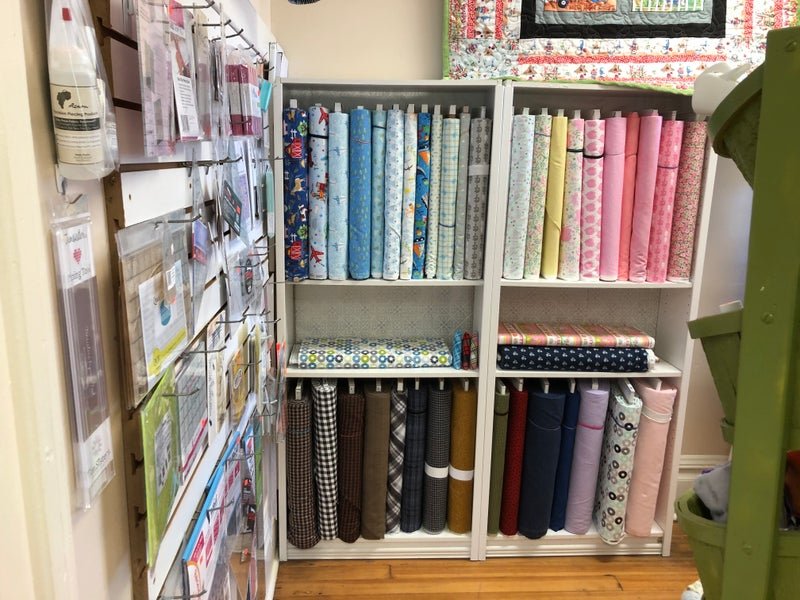 In the large back room, enter the doorway on the left to find more fabrics made of both cotton and polyester material (more fabrics than shown here). 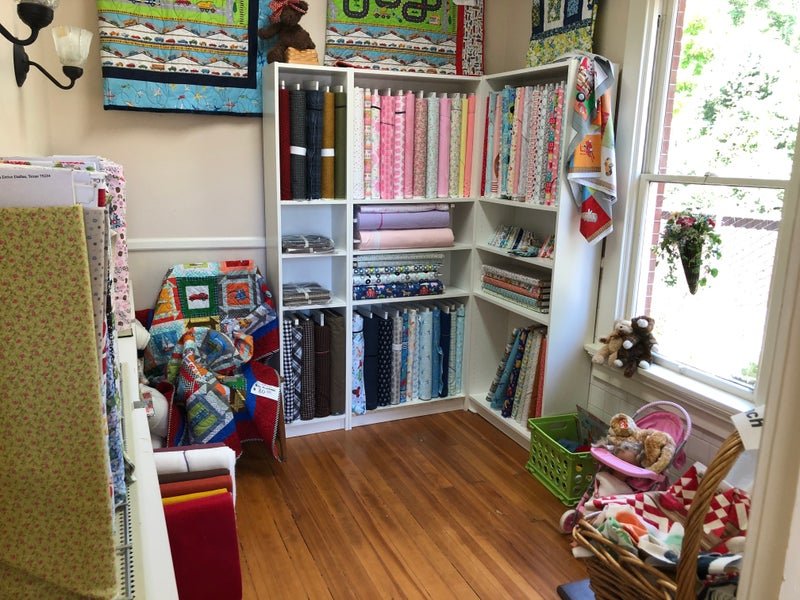 Proceed through this room and find our clearance room with discounted fabrics, wools, and other miscellaneous items.